Germany’s contribution to the defense of the European security order is essential, yet it remains highly controversial domestically. The German defense sector has become deeply fragmented and urgently needs restructuring to be able to deal with current and future threats. As it stands, political acceptance for and meaningful decisionmaking in German defense policy are often in short supply. The beginning of the next legislative period in September 2021 offers a favorable window of opportunity to launch the necessary reforms, as it comes with several crucial changes: the chancellor will change, as Angela Merkel is not running again; the governing coalition is likely to change and include the Green party; and a larger number of parliament members will change, bringing not only a generational change but also new approaches to security and defense (for better or worse).

Three core tasks should be on the agenda of the new government: (1) improving linkages between national security policy and society; (2) consciously and systematically engaging with international partners; and (3) reorganizing the German defense sector (i.e., the armed forces, Ministry of Defence, and budgeting and procurement system). Germany has better chances to succeed when supported by its allies and partners, who can remind Berlin of its international responsibilities.

Germany’s geostrategic position in central Europe, its economic power, and the size of its armed forces and command structures make it a central factor in Europe’s deterrence and defense posture. However, despite some changes over the last decade, Germany’s restraint on defense remains a defining factor: defense has little public support, remains controversial, and does not figure high on the policy agenda. If it does, it is usually due to scandals rather than to bold initiatives.

Over the last decade, particularly since the so-called 2014 Munich Consensus, when leading German politicians called for greater international commitment, Germany has made remarkable progress in defense policy. It has defined new strategic guidelines with the 2016 White Book on Defense; increased defense spending (from some €33 billion in 2013 to almost €46 billion in 2020, or roughly $39.9 billion to $55.6 billion); intensified its military commitment in the North Atlantic Treaty Organization (NATO) and the European Union, such as leading one of NATO’s enhanced forward presence battalions in the Baltic countries; and demonstrated political leadership in shaping EU sanctions against Russia after 2014 and launching new EU defense initiatives, such as the European Defense Fund. Unfortunately, this dynamic has slowed since 2017, during Chancellor Merkel’s last term, and deep, structural deficits in the defense sector and in policymaking have continued growing.

These structural deficits include:

These issues have amalgamated into an interlocking problem landscape. For example, missing air defense is not only a problem of limited resources but also of an inadequate procurement organization and a lack of political understanding of the renewed importance of this capability in today’s threat landscape. Under these conditions, simple, incremental solutions will not deliver. Tough decisions are needed to cut the Gordian knot.

To do this, the new government must first come into place. However, with the upcoming elections, it is politics first, policies second, for the time being. It is not the structural problems of German defense that will feature highly in the election, but those that polarize—such as spending, nuclear sharing, defense export policies, and use of drones.

The Three “No-fun” Phases Ahead in German Politics

While German defense policy has been driven mostly by domestic issues and solidarity with partners (rather than security considerations), the election campaign will turn it even more inward. This navel-gazing will run through three phases: the election campaign through September; the subsequent coalition treaty negotiation; and the first months of the new government. Far from stopping with the September elections, debates on defense policy will continue and likely intensify with the first decisions of the new government when politics meets reality.

Phase One – Election Campaign: German election campaigns tend to be sleepy and only intensify in the final weeks. But this time is different due to shifts in party leadership, changing coalition dynamics, and the issues on the table. In addition to the end of Angela Merkel’s 16-year chancellorship, changes are likely in the governing coalition (likely to include the Green party) and in parliament, which may see significant generational change.

In terms of party leadership, it took Merkel’s own conservative Christian Democratic Union party until April 20 and a bitter, almost self-defeating, infight to nominate Armin Laschet as candidate for chancellor. Laschet’s reputation was severely damaged by the fight, and he is not known for his foreign policy credentials.

On April 19, the Green Party, which has become the second most popular party, nominated for the first time ever a chancellor candidate, Annalena Baerbock, who is known to be an efficient manager and a dedicated European. For a likely Green-Conservative coalition, it will be challenging to find common ground on security and defense.

The Social Democrats have also undergone a self-defeating process to define their candidate. With current finance minister and vice chancellor Olaf Scholz, they chose a mainstream candidate with recognized government experience. Yet he is surrounded by two left-wing party leaderspotenti and an equally left-wing, powerful head of the parliamentary group. The latter has a clearly defined security and defense position—against nuclear sharing and NATO’s 2 percent defense spending pledge and pro-disarmament.

Finally, defense might play a role. Political parties seem tempted to use defense issues to differentiate themselves from one another. This could include scandalizing certain topics, particularly the use of armed drones, arms exports, defense spending, and nuclear issues.

Phase Two – Coalition Negotiation: In Germany, coalition negotiations among parties are usually necessary as no party is able to individually secure a majority. This agreement is formulated into a coalition treaty, which contains a four-year work program. What is mentioned in the agreement is difficult to ignore. Hence, the defense language will be important, including how coalition partners bridge their differences and agree on a common government program.

In the past, this negotiation period took several weeks, and the new government was sworn in before Christmas. Yet four years ago, it took until spring the following year to agree—an unprecedented situation in German history. Until the new government is in place, the previous one acts as a caretaker, preventing Germany from taking any strategic or contentious decisions.

During this phase, the key positions in the parliamentary groups and the parliament’s committees are also appointed. They are key, as parliament has a crucial role in defense, from authorizing procurement (for any item above €25 million, or roughly $30.1 million) to military deployments.

Phase Three – New Government: This encompasses roughly the first year of the new government. As the coalition will include new actors, Berlin’s allies should expect a steep and sometimes painful learning curve when principles and good intentions meet with reality. This applies particularly to the Greens, who have not been in power at the federal level since 2005 and tend to take principled positions on defense, which usually differ from those of potential conservative or liberal coalition partners. Contentious areas to watch include industrial cooperation and arms exports; deployments of the armed forces; and principles-based stands on Russia and China.

What Can Allies and Partners Do?

This uncertainty is likely to last well into 2023, portending a difficult time for decisive cooperation with Germany’s allies and partners, who would be well-advised to understand the driving forces and logic behind these shifting positions and explore the room for maneuver and compromise to support the new government.

The challenge for Germany is to find a new dynamic for the coming years, built upon a convincing narrative, and find the courage to address its deeply enshrined structural defense problems. To be clear: addressing these structural and political challenges is not something that garners a German politician the support of the public—as defense issues remain highly controversial. Nor does it help in internal party power positioning: in Germany, you can lose elections or minister portfolios over defense issues, and you hardly win them. This decreases the chances for the next government to consciously engage in the badly needed structural changes and be successful.

As allies and partners seek to engage, there is a risk their well-intended comments might trigger unintended and counterproductive reactions in the German debate. Discussions with the comparatively small group of people interested in and knowledgeable on defense is like preaching to the converted.

Yet, there are three options to externally support the small defense community by helping political elites to understand the relevance of defense. First, explain how important or controversial defense is in your country compared to other topics, how defense interacts with other issues (from climate change to industry), and where parallels with Germany exist. A second option is to effectively tease out or build on German self-images or stereotypes to get Germany to act. For example, insofar as Germans want to be good Europeans and helpful members of NATO, it can help to remind politicians of the importance of the multilateral order, the need to defend it, and the value of alliances and partners in this pursuit. Finally, Germany thinks of itself as a well-organized, efficient country and a land of engineers. It is almost unbearable to have a military that does not work—and even more unbearable to have allies and partners that know that.

This commentary first appeared in "Security in Northern Europe in the Biden Era. Redesigning Multilateralism" published by the Center for Strategic & International Studies" in April 2021.

Dr. Christian Mölling
Deputy Director of the Research Institute; Head of the Center for Security and …
Twitter
@Ce_Moll 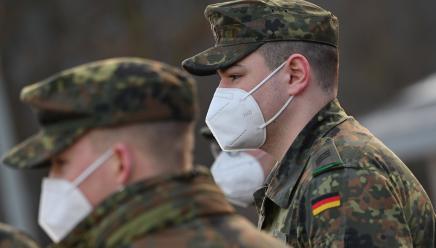