The meltdown in Afghanistan has brought Europe's rancorous debate over immigration and asylum back to the fore. The new front line is the border area between Belarus and its EU neighbors, where politicians are already exploiting the plight of refugees for political gain.

The humanitarian crisis in Afghanistan has already deepened conflicts elsewhere, including Europe, where a confrontation is escalating between Belarus and its European Union neighbors: Poland, Lithuania, and Latvia.

Even before the meltdown in Kabul, Belarusian President Aleksandr Lukashenko had been funneling refugees and migrants across the border, both to exact revenge for EU sanctions on his dictatorship and to generate some additional revenue. Belarusian authorities have organized flights from Iraqi and Turkish cities. After charging several thousand dollars per passenger and promising safe and seamless delivery to Western Europe, they have been dumping their human cargo on the Polish, Lithuanian, or Latvian border.

Since the beginning of the year, more than 4,000 refugees have reached Lithuania – a 50-fold increase from 2020 – shaking local communities and roiling domestic public opinion. Faced with the influx, Lithuania and Latvia have introduced a state of emergency. Now Poland, where there have already been several hundred attempts to foist refugees across the border, is joining them. Confused, lost, and hungry refugees are being captured in border towns and forcibly returned to the Belarusian side. Although such “pushbacks” run afoul of the Geneva Convention, EU countries have increasingly relied on the practice.

Poland is openly ignoring the right of all refugees to apply for international protection. Rather than placing them in designated centers and investigating their claims, Polish authorities are expelling them as quickly as possible. As a result, there are growing encampments in the border zone.

For the past two weeks, the country’s attention has been drawn to a group of 32 migrants from Afghanistan who were sent back to the Polish-Belarusian border: haggard men, women, and children wandering the border area, boxed in by border guards, military personnel, and police from both countries. They sleep on the ground, while lawyers, journalists, opposition MPs, and even doctors are given no access. Polish authorities have not provided food, so the refugees are surviving on bread from the Belarusians and water from a stream. Without hygiene or medicine, more and more of them are falling ill.

Meanwhile, Poland’s de facto leader, the Law and Justice (PiS) party chairman Jarosław Kaczyński, has been exploiting the situation for his own propaganda purposes, hoping that opposition to accepting refugees will have a similar galvanizing effect for his supporters as it did in 2015. PiS is growing more desperate now that its support has dropped to 30% – a level that no longer guarantees an electoral victory.

The Polish government wants to create an atmosphere of fear, so that it can position itself as the guardian of a supposedly endangered society. The authorities immediately sent helicopters and 1,000 soldiers armed with machine guns to face a group of desperate unarmed people. A high barbed-wire fence is now being erected along the border with Belarus, where the prime minister and cabinet ministers have staged visits dressed in military uniforms, promising to rescue Poles “from a new wave of refugees.”

On August 25, the European Court of Human Rights ordered Poland to provide refugees on the border with water, food, clothes, medical care, and, if possible, temporary shelter. But the Polish government claims that it is dealing with illegal immigrants who could not be helped anyway, because they are on the Belarusian side of the border (which is not true). To create an alibi, it has sent a truck with food and medicine to a border crossing far from where the Afghans are camped out. As predicted, Belarus is denying the truck entry.

None of this adds up, because all sides are engaged in the most cynical kind of politics. Belarus is refusing to allow aid to reach the refugees while simultaneously boasting that it is helping with the evacuation of Afghans from Kabul. Poland, similarly, is refusing entry to Afghan refugees while simultaneously accepting thousands of Belarusians fleeing Lukashenko’s dictatorship.

The Polish government’s behavior has drawn harsh criticism from the liberal media, NGOs, and the opposition. But the response of Donald Tusk, the former Polish prime minister and European Council president who returned to domestic politics this summer, has been notably subdued. Though Tusk criticizes the government for refusing to provide the most basic assistance to the refugees, he also stresses the need to maintain tight control over the border.

Tusk well knows that ordinary Poles are not as sympathetic toward refugees as the liberal media and NGOs are. This is confirmed by an Institute for Market and Social Research (IBRiS) survey showing that a majority of Poles (54%) are against accepting immigrants and refugees, whereas only 38% of respondents support opening the borders to them. When asked whether a wall should be erected on the border between Poland and Belarus, 47% of respondents answered yes, while 43% disagreed.

The Polish government’s response has been carefully executed to achieve a maximum propaganda effect. If the Polish authorities were truly worried about the refugees camped out at the border (and others who might be sent by Lukashenko), they would have already erected a fence a month or two ago. Everyone has known about the similar situation at the Lithuanian-Belarusian border for quite some time. A coordinated propaganda operation by the Polish and Belarusian governments could not be more effective.

This text was first published on August 31, 2021, by Project Syndicate. 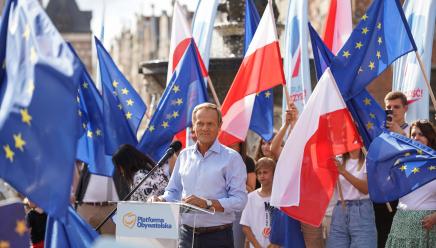