The Ukrainian offensive launched on September 6 in the Kharkiv region has achieved major results. Ukrainian forces liberated almost the entire region, pushing Russian troops back behind the Oskil River while inflicting serious losses on them. Hundreds of Russian soldiers have been captured, the rest largely fled in panic, and only a few units sporadically put up any meaningful resistance.

The offensive was reportedly planned in close cooperation  between Ukrainian, US, and British military planners, and was properly tested in war-games in advance. The Kherson offensive that started on August 29 and the Kharkiv one a few days later were parts of the same, well coordinated strategic plan, aimed at catching Russia’s forces off-guard and defeating them.

Even in Russian mainstream media channels criticism is being voiced

The Ukrainian victory at Kharkiv has significant political consequences in Ukraine and in Russia. In Ukraine, the Russia-appointed leaders of the occupied region gave up the plan to organize a “referendum” aimed at legitimizing Moscow’s control over it. The political experts deployed by Russia have already been withdrawn from Kharkiv, and reportedly also from the Kherson and Zaporizhzhia regions. By blocking Russia’s plan to annex these territories by holding fake referenda, Ukraine has achieved an important political success.

The battle of Kharkiv is impacting also Russia’s political scene. Unlike the defeat at Kyiv at the start of the invasion in the spring, this time the Kremlin did not manage to frame the events for the Russian public. News about the defeat at Kharkiv is penetrating public discourse and criticism is being voiced even in mainstream media channels. The Kremlin is already trying to shift the blame from President Vladimir Putin to the Ministry of Defense and the military leadership.

The most important development at the military level is that Ukraine’s second-largest city, Kharkiv, has been relieved from Russia’s artillery shelling and Ukrainian control over large sections of the border with Russia has been restored.

The Ukrainian victory at Kharkiv has also demonstrated the structural weaknesses of Russia’s military intelligence, particularly at the operational level. Just as with the Kherson offensive, Russian troops were completely surprised as intelligence failed to detect the Ukrainian preparations and could not forecast the attack.

The subsequent collapse of the front line indicates major structural weaknesses in the command and control of the Russian armed forces as well as in their morale and discipline, the latter concerning particularly the separatist units.

Russia’s losses have been massive, not only in territory and prestige but also in military hardware. Based on open source analysis, it lost at least 151 infantry fighting vehicles and 104 tanks, most of which were captured intact by the advancing Ukrainian forces, in addition to large amounts of ammunition, equipment, and other military hardware. Losses on such a scale are likely to deprive Russia of the ability of launching any major offensive operations in the coming months, possibly not before early next wear.

Western support is still of crucial importance and must be maintained

However, it would be a mistake to overestimate the importance of Ukraine’s victory at Kharkiv and to think that it has won the war. The victory is unquestionably important at the tactical and operational level but the war goes on.

At the strategic level, Russia still has escalation dominance despite the blow it has received. While it is unlikely to launch any new, major conventional attack soon due to the losses it suffered, it still has the ability to abandon its “special military operation” narrative, declare war, and call a partial or full mobilization. As this would be politically extremely sensitive at home, a more likely option for the Kremlin is to intensify recruitment efforts and raise new units. Russia also still has the ability to hit practically any target in Ukraine with long-range cruise missiles. Ukraine has a deep strike capability too but so far this has demonstrated a range of less than 300 kilometers. Thus, it is able to threaten only Russia’s border regions and most of occupied Crimea. Russia has already started to systematically and massively target the civilian infrastructure of Ukraine’s major cities, indicating that it is not deterred by Kyiv’s deep strike capabilities.

Finally, Russia may still decide to employ weapon of mass destruction. Even though this is highly unlikely, in theory it is still an important element of its escalation dominance.

The West must not think that Kyiv has already won the war as a result of the successful Kharkiv offensive, and thus stop or decrease the flow of assistance. On the contrary, Western military, financial, economic, political, informational and intelligence support is still of crucial importance and must be maintained.

This online commentary was published on September 15, 2022. 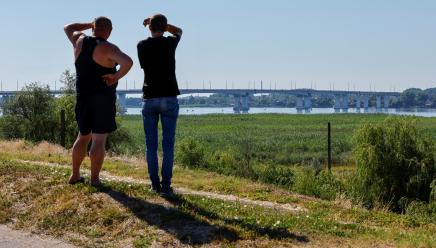