The COVID-19 pandemic has highlighted the importance of science advice in democratic policymaking. But the lack of diversity within the expert bubble makes it less likely that science advisors will think “outside the box” when it comes to solving complex policy problems. Greater diversity in policy advice can help us design better policies for diverse societies. Here’s how we can advance diversity, equity and inclusion in this area.

The political response to the COVID-19 pandemic has shown in dramatic fashion that different social groups have different needs and are affected by the same policies in different ways. Apparently, the under-representation of women and younger people in national COVID-19 taskforces and advisory councils contributed to the side-lining of the needs of these demographics in the political responses to the crisis. When the German National Academy of Sciences Leopoldina’s COVID-19 working group advised the German government to keep kindergartens closed and enforce strict social distancing rules in schools, it turned out that no one aged under 50 years old was included in the working group and more men with the name Thomas than women were involved (Munzinger 2020). The homogenous make-up of the advisory group put into question whether all relevant perspectives had been assessed.

“There are stories of colleagues who do not
feel safe to speak up in staff meetings
because of their working-class backgrounds
and because they fear they will not sound
‘smart enough’.”

Science advice is significant for democratic policymaking. The role of scientific advice bodies, policy research institutes and think tanks is to provide political decision-makers with advice based on the best available evidence to help them make good decisions. To deliver sound recommendations, the scientific method needs to be applied rigorously to evaluate what has worked in the past and is likely to work in the future. A similarly important but often overlooked task is to examine what has not worked and why. For instance, the demographic composition of scientific advice bodies plays a particularly important role: homogeneity within the policy expert bubble leads to “groupthink” or confirmation bias (Colonomos 2016). When scientific advice bodies act as echo chambers, the likelihood that we will think “outside the box” when it comes to solving complex policy problems is diminished compared with more diverse group settings. Our personal experiences influence our views on sociopolitical issues. And when the people around us share a similar educational background and upbringing, we tend to mutually confirm our own assumptions and reinforce the status quo. Unequal representation in terms of gender, education, age, socioeconomic, cultural and ethnic backgrounds in the staff, panels and publications at think tanks can create a slippery slope in which the policies recommended are less likely to respond to the realities of a diverse society and may thus re-embed the status quo, including the precise inequalities that diversity and inclusion efforts aim to level out. If scientific policy advice seeks to be a force for political innovation rather than preserving the status quo, there is no way around investing in inclusive organisational culture.

In the United States, the #MeToo and Black Lives Matter movements have sparked a debate over how to make think tanks more inclusive. Many US think tanks across the political spectrum have gone on to adopt institutional diversity policies, with some publicly releasing demographic information about their staff. In contrast to their US counterparts, until recently, think tanks in Europe have not held in-depth discussions about diversity. This is reflected by the fact that hard data on diversity in European think tanks is hard to come by. Recent studies have tried to close the data gap on gender equality. For instance, in an analysis of high-level policy conferences in Europe for the years 2012-2017, a report by the Open Society Foundations (2018) found that 74 percent of speaking roles were given to men and only 26 percent to women. The COVID-19 pandemic increased the gender gap in policy research and debate. A study carried out by volunteers at The Brussels Binder (2021) found that women account for only one third of total research authors at 33 European and national think tanks. These findings are in line with gender imbalances of think tank workforces. In a review of the gender composition at 25 European think tanks, a study by the German Marshall Fund (GMF) reveals that while European think tanks employ men and women in nearly equal proportions, the leadership of the institutions continues to be male-dominated (Hörst et al. 2020). This is also the case for senior research and analysis positions which are male-dominated.
Unfortunately, there is a lack of data about other dimensions of diversity beyond gender. This means that intersectional approaches to diversity, equity and inclusion (DEI) targeting the think tank ecosystem currently lack a quantitative evidence base. Think tanks that want to improve their DEI record will need to develop their own benchmarks.

While diversity statistics for European think tanks are rare, during our Think Tank Lab Diversity Challenge, we heard many personal stories about experiences of exclusion. There are stories of people who did not apply for jobs for which they were qualified because they felt discouraged by the wording of the job postings. There are stories of colleagues who do not feel safe to speak up in staff meetings because of their working-class backgrounds and because they fear they will not sound “smart enough”. And there are stories of colleagues who find their competence questioned based on their looks and age each time a media statement is issued. But there are also stories of colleagues who put incredible dedication into reading up on DEI, mentoring younger staff and organising anti-bias training sessions, often in their free time and without guidance or additional resources.

How to advance diversity, equity and inclusion in policy advice

Based on our work in the Think Tank Lab Diversity Challenge (German Council on Foreign Relations 2022), here are five suggestions that could help you to speak up for greater diversity in policy advice: 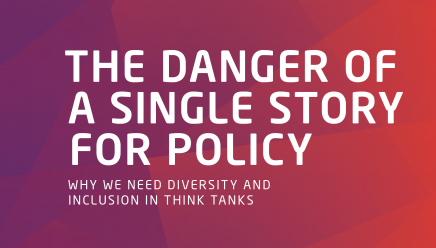