Russia Goes for Annexation and Mobilization

Russia plans to mobilize 300,000 reservists to defend annexed Ukrainian territories; training, equipping, and leading the reservists will be problematic, and panic is unfolding among military-age Russians

On September 20, the Russia-imposed “governments” of four occupied regions of Ukraine (Donetsk, Kherson, Luhansk, and Zaporizhzhia) announced that they will organize referendums on joining the Russian Federation. The timeline is extremely narrow, with the voting to take place between September 23 and 27.

This does not allow for proper preparations for any real voting: for example, there is no time for campaigning or for organizing voting districts and selecting their members. There will be no independent monitoring of the voting or the counting. Hence, apart from the fact that these referendums are illegal under Ukrainian law, there is no way that such sham plebiscites could produce any even remotely legitimate results. These referendums will be even more illegitimate than the one in Crimea in 2014.

The separatist leadership of occupied Zaporizhzhia has gone even further and already declared secession from Ukraine, thus basically declaring the result days before the voting.

By hastily organizing these fake referendums, Moscow is creating the pretext to annex these Ukrainian territories and to incorporate them into the Russian Federation. It intends to use them as a policy tool to extend Russia’s claimed sovereignty over further parts of Ukraine. Annexation is likely to take place very quickly once the referendums are completed.

While no one except perhaps a few close allies of Russia such as Syria and Venezuela will recognize these annexations as legitimate actions, they are very important from the security point of view.

Annexation creates for the Kremlin the pretext for defending these territories as if they were Russian lands. This means mobilization, deploying conscript forces into battle, and possibly even using weapons of mass destruction.

Crucially, the separatist leaderships claim the whole territory of these four regions of Ukraine, even including those parts of them that are not under Russia’s de facto control. Hence, after annexation by Russia, a dangerous situation will emerge on the front lines. From then on, the question will not be anymore whether Ukraine’s forces might cross the “border” with Russia, because the Russian border will have crossed them as Russia will claim even those parts of the four regions that are under Ukrainian control.

The annexations would also create a point of no return for the Kremlin, making any meaningful negotiation toward a settlement impossible.

Training the mobilized reservists will constitute a major bottleneck

In line with Russia’s intention to annex these Ukrainian territories, in the morning of September 21, President Vladimir Putin in a televised speech announced partial military mobilization. The official reason is to defend Russia as well as the Ukrainian territories it claims to have “liberated.”

What is already evident that properly training the mobilized reservists will constitute a major bottleneck. Russia does not have the infrastructure necessary for training so many people in addition to the conscript soldiers. Besides, many of the professional and contracted soldiers who could train the reservists are serving in Ukraine, or have been wounded or killed. It is also questionable whether reservists will get proper weapons and equipment. Moreover, it is not yet known from where will Russia get the officers and noncommissioned officers, who could lead the new reservist units.

Russia officially has approximately 2 million registered reservists, but it has never had a well-functioning system for keeping them properly trained. Hence, this partial mobilization will unfold relatively slowly and gradually, in a few months’ time.

Putin apparently crossed a sensitive threshold for the population

Still, the likely objective of the mobilization is to address the major shortage of manpower that the Russian army has been facing in Ukraine, and particularly in the offensive operations in Donbas. Hence, many of the mobilized reservists are highly likely to be deployed into combat in Ukraine, particularly after Russia annexes the four territories, so that the Kremlin can then claim that they are fighting to defend the motherland. High losses can be predicted among the reservists due to their low level of training, low motivation, outdated equipment, and shortage of experienced officers and noncommissioned officers.

A more detailed assessment of the likely use and deployment of reservists can be made, once the mobilization starts unfolding.

Panic spread among military-age Russian men immediately after Putin’s speech. Most flight tickets out of the country were sold in a few hours and massive traffic jams formed on the Russia-Finland border because of the Russian men trying to leave the country.

This indicates that, by ordering even a partial mobilization, Putin apparently crossed a sensitive threshold for the population. The reason is that until this point the war did not affect most Russians directly but only those fighting in Ukraine – professional or contracted soldiers, law enforcement personnel, mercenaries, etc. – and their families. However, from now on, a much larger number of Russians will be directly affected by the war, regardless of whether they support the “special military operation” or not. Voluntary involvement is being replaced by hard coercion.

It is too early to judge, how large and how lasting the negative public reaction to mobilization will be beyond the attempts to leave Russia and some initial protests. However, it is certain that this decision could undermine the core foundations of Putin’s regime if a large number of reservists are killed in combat.

This online commentary was published on September 22, 2022. 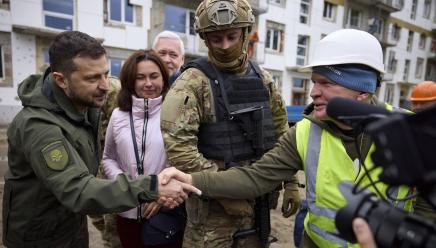