Prepare for the Worst

Learning from Past Blind Spots on Russia and Ukraine

Since 2014, Western governments have time after time failed to forecast Russia’s political and military intentions towards Ukraine. Faced today with another crisis involving an unprecedented buildup of Russia’s military along Ukraine’s borders, the EU and Germany must avoid repeating that mistake and prepare for every scenario, including a military escalation. That means trusting what they see rather than what they are told.

Since the wave of civil unrest in Kyiv in December 2013 that eventually led to the Euromaidan, the West has failed multiple times to forecast Russia’s political and military moves towards Ukraine. The occupation and illegal annexation of Crimea a few months later took the EU, including Germany, by surprise. Many Western governments underestimated Russia’s resolve and audaciousness to such an extent that they cautioned Ukraine’s temporary government at the time not to resist the incoming Russian forces, hoping in vain to find a diplomatic solution.

They were similarly surprised by the speed and scale of the Russian-backed uprising in eastern Ukraine and the large-scale invasion by Russian regular troops, which culminated in the catastrophic defeat of the Ukrainian army at Ilovaysk in September 2014. Then, while the EU hoped that the Minsk ceasefire agreement would end the fighting in Donbas, Russian-supported irregular forces exploited the opportunity to capture the southeastern edge of the Donetsk region down to the Azov Sea, very nearly taking Mariupol, a city of more than 400,000 inhabitants.

In September 2014 the European Commission delayed implementing the EU-Ukraine Association Agreement by a whole year, hoping for concessions from Russia. But postponing this political and economic rapprochement did not help end the conflict. Instead, during the negotiation process of the Minsk II agreement, Russia delivered another devastating blow to Ukraine’s armed forces at Debaltseve in February 2015. Most recently, after the 2019 election of Volodymyr Zelensky as Ukraine’s president, France and Germany hoped for a meaningful revival of the Normandy Format talks, but again Russia made no significant concessions beyond a few tactical, easily reversible moves.

The core mistake has almost always been the same: the West is misled by its conviction that it knows Russia and the assumption that the Russian state operates according to the same standards and rationale as itself. And it assumes its disinclination to come to blows with Russia is reciprocated. In this many Western leaders accord too much importance to the declarative side of the Kremlin’s foreign policy: they take it at its word. With Russia again massing troops along Ukraine’s border, recalling the West’s multiple failures to properly forecast Moscow’s objectives and resolve due to these blind spots should serve as warning.

Russia’s illegal annexation of Crimea was motivated by geo-strategic considerations; the subsequent rise in President Vladimir Putin’s popularity was only a welcome side effect. Today, by contrast, domestic considerations are highly likely to play an important role in the Kremlin’s calculations, alongside strategic motives such as hampering Ukraine’s NATO ambitions, as it prepares for parliamentary elections by September at the latest. However, many Western diplomats and experts assume that the Russian population would not support military action Ukraine, and that Putin cannot afford this at a delicate political juncture.

If the Putin regime aims to retain a solid majority in the Duma that makes it possible to change the constitution further and to continue the transformation of Russia’s political system, it cannot afford to alienate large swathes of the electorate. But since, according to the state-owned VTsIOM pollster, the popularity of the ruling United Russia party stands at 29.4 percent, the Kremlin’s objective is probably not to win the support of the whole of society. It is already too late for that, given the growing economic hardship in the country as well as the coronavirus pandemic. The regime’s more pragmatic goal is likely to mobilize its core electorate, as well as those so far undecided voters who would welcome another, preferably quick victory over Ukraine.

Russian public opinion towards Ukraine has soured in recent years, making it more likely that a hostile action may find support. The public demonstrated a more positive attitude towards the country when Crimea was annexed than it does today. In January 2014, according to the Levada Center, 65 percent of respondents considered relations with Ukraine to be good and only 25 percent that they were bad. Nevertheless, the Kremlin created a lasting rally-around-the-flag effect by occupying Crimea. The public’s attitude towards Ukraine is now much worse. As of March 50 percent of respondents said relations with Ukraine were good and 35 percent that they were bad. Hence, the Kremlin could escalate in eastern Ukraine, while blaming this on Kyiv, for domestic political gain ahead of the Duma elections. This would not even require all-out war and new territorial gains: limited military action aimed at “repelling” a false-flag attack would serve this purpose.

Facts Are More Reliable than Statements

Moscow has a century-long, uninterrupted tradition of conducting information warfare in the West. Due to the nature of the regime, Russia’s political leaders are also much less bound by the requirements of credibility than their Western counterparts. What is more, in foreign policy effectiveness regularly justifies outright lies, and the objective is often not to convince but to confuse. Putin’s famous statements in 2014 about the absence of Russian soldiers in Crimea, backed by a misleading phone conversation with Chancellor Angela Merkel, are a classic example of this.

The present crisis is no exception. While some officials such as Presidential Spokesperson Dmitry Peskov and Minister of Foreign Affairs Sergei Lavrov have tried to reassure Ukraine and the West about Russia’s intentions, others like Minister of Defense Sergei Shoigu are making demonstrably false statements to justify the military buildup. The Kremlin’s narrative of only reacting to Ukraine’s mobilization around eastern Ukraine does not correspond to reality as Russian troops started to move much earlier than their Ukrainian counterparts. Moreover, this narrative does not explain at all the movements of troops in Crimea. The large-scale military exercise announced by Shoigu on April 6 is hardly a credible cover either, as Russia has been massing forces since late February.

Consequently, neither the public statements of Russia’s leaders nor their promises behind closed doors should be taken as guarantees or even as indicators of their intentions. Instead, as the history of the crisis in Ukraine has shown too many times already, they probably are elements of a complex information operation. The West’s analysis of the situation should be built on the facts on the ground, not on declarations that can change easily.

The EU and Germany Need to Prepare for the Worst

Russia’s military buildup along the border with Ukraine has been relatively slow and gradual, making it hard for Western governments to set thresholds for action. In early March the number, composition, and logistical readiness of the Russian forces were evidently insufficient for any major operations; today this assessment bears revision. Just a few weeks ago troop movements were not yet supported by field hospitals, a crucial prerequisite for any kinetic military action; numerous ones have now been constructed. More starkly, since at least the start of this month the scale and complexity of the Russian troops mobilization has exceeded everything around Ukraine since the battles of 2014–2015.

So long as these field realities do not change, a range of negative developments up to a major military escalation cannot be ruled out. The planning by the EU and its member states must not be based on what they think they know about Russia or what Russian leaders may have promised. Consequently, besides continued diplomatic efforts to defuse the crisis, they should prepare detailed plans of action that signal to Russia there will be significantly high costs to further military escalation. The possibility of taking certain measures in smaller groupings should also be examined so as to prevent any single member state paralyzing the EU with a veto threat. This planning and eventual implementation should be done in close coordination with the United States too.

Plans for multilevel sanctions also need to be elaborated, which could be implemented in a gradual response to escalation by Russia. This should include sanctions targeting its energy industry and banking sector, and widespread individual sanctions to downgrade its intelligence capabilities within the EU. The EU should also pursue a determined implementation of anti-money laundering legislation against the assets of Russian leaders and oligarchs, and offer military and economic assistance to Ukraine. Should the situation deteriorate, the freezing of the construction of the Nord Stream 2 pipeline should be considered too.

The EU and Germany can hope for the best, but they should plan for the worst. Having detailed plans that later turn out to be unnecessary is better than being unprepared, as they have so often been in the past. 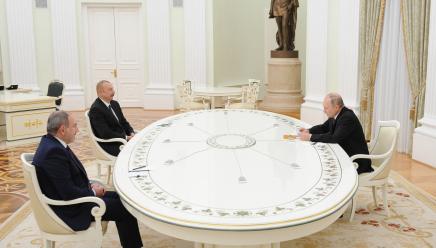 Nagorno-Karabakh after the ceasefire agreement