Germany wants to come up with a national security strategy (NSS) by the end of 2022.  The new government started out with great ambitions in security and defense policy. However, for many allies, Germany seems to be once again a weak link and an unreliable partner in European defense. Instead of focusing on security, it should focus on a strategy for action in the event of conflict. This requires to broaden the concept of security and include more policy fields, especially technology, innovation, and internal security.

Germany’s new government started out with great ambitions in security and defense policy. The first statements and foreign trips of the new government officials to France, Poland, the US, and Ukraine, were reassuring. However, after this rather ambitious start, hesitations, inconsistent action and messaging vis-à-vis allies, worries about how the German public would perceive government decisions, and irritatingly over-cautious moves towards Russia, have overshadowed initial impressions. For many allies, Germany seems to be once again a weak link and an unreliable partner in European defense.

These hesitancies and inconsistencies leave allies with mixed messages or very late and timid responses to pressing issues. A case in point is how late Germany confirmed that the Nord Stream 2 (NS2) project would be sacrificed in the event of Russian aggression. Unsurprisingly, some allies are tempted to interpret Germany’s current position according to a broader picture of Germany as an unreliable foreign policy partner. Germany has earned this reputation by missing NATO’s 2 percent defense investment guideline, failing to deliver promised military hardware to NATO, supporting the NS2 pipeline, and announcing that it will join the UN Treaty on the Prohibition of Nuclear Weapons as an observer. For some of its allies, Germany weakens the political cohesion at the core of NATO’s power.

This is not the first time Germany’s actions (or inaction) have raised concerns among allies. Some may still remember the 2011 UN Security Council vote on the intervention in Libya, where Germany found itself in one camp with China and Russia, while NATO allies sat in the other. In the wake of the 2014 Russian invasion into Ukraine, Germany was at first hesitant to recognize the increased threat to peace posed by Russia.

In fact, the current government has so far largely continued the Merkel-era policy path on Russia and Ukraine, and security policy more broadly. Perhaps that’s not much of a surprise since the social democrats had a say in shaping the Merkel government’s policies as its junior coalition partner. This also points to the fact that there are deeper historical roots to this approach than party politics.

The government’s particular way to act comes at a crucial time for European security. Not only because Russia aims to rewrite the principles of security and stability in Europe, but because Europeans are in the process of shaping their new strategic concept. The EU writes a Strategic Compass and NATO writes a Strategic Concept. Both documents aim to set the course of Europe and NATO security readiness for the next decade. To remain valid until 2030 and beyond, these documents need to deal with issues spanning from well-known structural ones, such as how to deal with Russia and the European neighborhood, and with nuclear deterrence, to ongoing developments like the US pivot to Asia, Europe’s need to take more responsibility for its own security, and technological developments. Let’s not also forget that the plans must factor in the changing nature of conflict, too. In all these questions, Germany’s position is key. But so far, it is not well-defined.

The Way Forward: Delivery and Prioritization

Despite the current disappointment at the government’s goofed-up start and murky track record, it’s not in any European country’s interest ­– except Russia ­– to see Germany isolated and inactive in defense.

The current government has only been in power for two months and it is too early to make harsh judgements. There is still hope that Germany adopts a more consistent and responsible approach. Allies can support Germany by recognizing that German politicians and the public might have different preferences to them. Yes, Germany often acts late in international crises, but when it does take action, it does the right thing. For example, in 2014, after the annexation of Crimea, Germany first hesitated, but then tried to make up for its actions once it had realized what a devastating message its behavior sent for European defense and for European and transatlantic cohesion. Berlin took up a leading role within the EU by shaping the sanctions against Russia, in NATO with strong support for military and political adaptation, in other areas like the Normandy Format, and by starting to reset its defense policy.

Germany now has one short-term and a long-term task to remedy the current lack of prioritization, reliability, and clarity.

In the short-term, Berlin should define what it wants to do and deliver on those plans, instead of talking to allies about what it cannot do. Here are some actions Germany can start with:

According to the coalition treaty, Germany wants to come up with a national security strategy (NSS) by the end of 2022. This would give the government an opportunity to prioritize the security policy wishlist of the coalition agreement. It will also help identify how the different security interests are linked and shape a toolbox that works by integrating different instruments.

To do this, Germany will need to take a different approach. Instead of focusing on security, the document should focus on a strategy for action in the event of conflict. The big challenge for Germany is to understand that its often binary way of classifying war and peace no longer reflects reality. The key feature of systemic competition is that conflict and contestation are  continuous and happen below the threshold of war. In our current times, conflict can change forms and intensity. Comprehensive and sustainable peace is rare. But to achieve it, preventive, coordinated and comprehensive action is necessary.

Moreover, the constant nature of modern conflict requires continuous action. But Germany’s action has been neither preventive, coordinated, comprehensive, or constant.

The next option to improve on some of the criteria, or on all, would be a chapter in the NSS that outlines the new dynamics of permanent conflict and how Germany will act in a more preventive, coordinated, comprehensive and continuous way.

A chapter in the NSS that speaks to the current nature of conflict can only be aspirational. To be implemented, Germany needs more than words in a document. Powerful political engagement is necessary to bring this message to the bureaucracy and society. In essence, this would mean revisiting the comprehensive approach that Germany made a key concept of its international engagement back in 2006. However, even then it failed to forcefully implement it. Today, the need to widen the concept of security and include more policy fields, especially technology, innovation, and internal security, is pressing. And these changes will inevitably impact the current setup of authorities and political powers – which makes it so terribly difficult.

This commentary is a chapter from upcoming DGAP Report No. 3 "NATO’s 2030 Reflection Process and the New Strategic Concept". 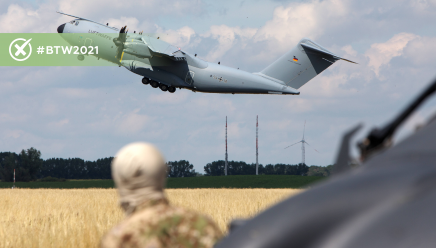 (Even) More Money for Security and Defense

How, For What, and Why Germany Should Increase Its Defense Budget
Author/s
Sophia Becker
Dr. Christian Mölling