Leading Europe out of its current COVID-19 induced crisis will be a monumental task for the German EU Council presidency. Economic stabilization must go hand-in-hand with transformation.
Daniela Schwarzer

As Germany takes over the EU Council Presidency, cautious steps toward a less restricted life are being taken throughout Europe. But the EU will not simply switch back to the old normal. Rather, we are facing a potentially existential moment. The second half of 2020 is a crucial period during which major decisions determining Europe’s future will be taken.

It may sound reassuring when policy-makers and analysts observe that the current crisis is most of all an accelerator of existing trends, such as great power competition, the demise of the international order, or autocrats’ reinforcing their grip on power.

In fact, the political and socio-economic context both within the EU and internationally is changing more quickly than before COVID-19 hit; the nature and map of conflicts is evolving, too. The geopolitical and geo-economic impact is likely to be big and lasting. Europe is not prepared for this and has very little time to adjust. Here are five observations that should inform our engagement for a stronger EU.

The symmetric shock has asymmetric effects which need to be mitigated.

Europe is experiencing quite possibly the crisis of the century: GDP is set to plunge by around 8 percent, many companies will go bankrupt, and unemployment will surge, hitting the young in particular and creating monumental socio-economic challenges.

On the surface, the shock may look symmetric, as the whole world is affected. On the ground, however, the damage will vary greatly among and within countries. Germany and France are the leaders in terms of supporting their economies with state subsidies. To some extent, their measures will pull other countries along in the single market. But divergences will deepen. This is why rapid and bold European action is needed to stabilize the economy. Leaders in the EU may also need to prepare for a possible hot autumn and rocky political times.

Transformation is the more challenging task than economic stabilization.

With the decision to launch four pillars of a broad economic support plan, especially the Recovery Fund, the EU is taking a quantum leap forward. Putting about  €750 billion on the table is unparalleled in European history. But so is the challenge: the job is not to save the status quo. The EU must strive for economic recovery and transformation at the same time with digital transition and the Green Deal. A competitive digital sector is of strategic importance for Europe and no EU country alone will be able to compete with China or the United States. Nor will Europeans be attractive cooperation partners, for instance if the transatlantic relationship under a new US leadership is relaunched, unless they invest now, as a union, in research, development, and education. In spite of the crisis around us, we need to invent our socio-economic and competitive model of the future.

The EU must uphold non-negotiable principles.

In an age of systemic competition, Europeans should not be tempted to compromise on democracy and the rule of law, which have been the pillars of peaceful European unification since World War II. Both are being challenged by some EU governments, like the ones in Hungary or Poland. They are also being deliberately undermined by external actors like Russia and increasingly China; both encourage authoritarian leaders and intervene in the EU public sphere and beyond.

As the EU establishes new financial instruments, it must make sure that any beneficiary of EU policies complies entirely to the principles of the rule of law and democracy. During the second half of 2020, when these tools will be put in place and the European Commission is to publish its first Rule of Law Report, Berlin bears a strong responsibility to ensure backing in the European Council.

Europe’s economic order should continue to be based on free and fair competition and strong joint external policies.

A functioning single market and a level playing field continue to be the best base for a competitive economy. The transformative EU agendas—digitalization and the Green Deal—need to be underpinned by national reform agendas coordinated within the EU’s framework for reform policies, and enabled by ambitious policies in the field of research, innovation, and education to enhance competitiveness.

Against this backdrop, the EU’s competition policy needs to be reviewed while Europe’s trade policy requires backing by a strong and united approach to dealing with China and the US. On October 1, 2020 the EU directive on investment screening, put on track by the Juncker Commission in 2017, will enter into force. France, Germany, Italy, and Spain, among others, have taken necessary action to ensure implementation. This is welcome, but it may not be sufficient under the new circumstances. A sober analysis of the new risks to Europe’s industrial competitiveness and strategic autonomy should inform further initiatives.

The EU will only be a strong player internationally it needs to provide protection internally.

For all this to work, the EU needs to deliver protection and European public goods that European citizens can grasp easily. At the crisis’ outset, governments acted according to national logics: undermining the EU’s single market, they imposed export bans for health material and closed borders. This was deplorable from a European perspective, the more so since countries like Germany that otherwise live a strong commitment to Europe acted that way.

This teaches us a lesson we already know from previous crises: To overcome borders and ensure freedoms, such as the free movement of citizens, the EU needs to provide for the necessary protection on the EU level. If it does not, the achievements of integration will crumble from within.

To maintain its capacity to act and to co-shape the global agenda, strengthening the EU’s internal cohesion and balancing economic recovery with a green and digital transformation is key. 2020 is a crucial year for the European Union to map its way ahead. Germany and its partners need to make sure that we do not miss opportunities we still have. 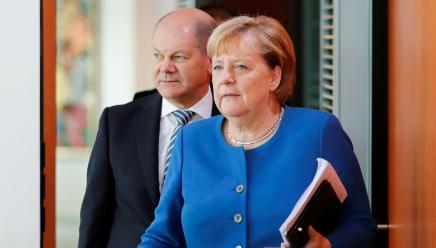