The book explains the fundamental contradiction in China’s foreign policy: contrary to its claims, China does not consistently uphold the principle of state control in its international affairs. This inconsistency is shaping China’s impact on the international order. This anthropological study of the foreign policymaking of the opaque Chinese party-state examines three case comparisons: the Responsibility to Protect, Hong Kong, and the World Trade Organization.

Throughout the post-Mao reform era, China has championed the principle of sovereign state control, which holds that states should not intervene in the affairs of other states. Yet as Tim Nicholas Rühlig argues in China's Foreign Policy Contradictions, in recent years they have not actually acted this way. Chinese foreign policy actions fail to match up with official rhetoric, and these inconsistencies—in combination with China's growing power-will have dramatic effects on the future shape of international order.

To explain these contradictions, Rühlig draws from a rich battery of in-depth interviews with party-state officials to explain the foreign policy dynamics and processes of the normally opaque Chinese party-state. He demonstrates how different sources of the Chinese Communist Party's domestic legitimacy compete within the complex and highly fragmented Chinese party-state, resulting in contradictory foreign policies. He focuses on three issue areas: international human rights law and "responsibility to protect" (R2P); China's role in World Trade Organization (WTO) policymaking; and China's evolving relationship with Hong Kong. In each area, different factions within the party-state wrestle for control, with domestic legitimacy of the party always being the overriding goal. This incessant competition within the state's institutions often makes the PRC's foreign policy contradictory, undermining its ability to project and promote a "China Model" as an alternative to the existing international order (and more specifically as a champion of nonintervention). Instead, it often pursues narrowly nationalistic interests.

By elucidating how foreign policymakers strategize and react within the context of a massive and complex bureaucratic system that is constantly under pressure from many sides, Rühlig shows not only why China's foreign policy is so inconsistent, but why it is likely to contribute to a more particularistic, plural, and fragmented international order in the years to come. This book represents a significant advance in our understanding of the foreign policymaking process in authoritarian regimes.

"As the Chinese party state is enhancing its efforts to make understanding China more difficult while peddling its propaganda kool-aid of China's inexorable rise, analysing the domestic complexities, the internal contradictions and the peculiar discrepancies of China's foreign policy development becomes ever more important. Tim Rühlig's book presents an extremely valuable contribution to this important endeavour. It should be widely read around Brussels and Europe's capitals."

--- Reinhard Bütikofer, MEP, Chair of the European Parliament's Delegation for Relations with the People's Republic of China

"Liberal students of global politics rightly focus on norms but tend to see foreign policy as coherent and normative diffusion as benign. In this imaginatively designed, meticulously executed, and theoretically significant study, we see how a fragmented Chinese party-state fuels the fragmentation of norms in an already fragile international order.”

"Life would be much easier if the consequences of China’s rise were simple and obvious. But they aren’t. And Rühlig skillfully unpacks the complexities and contradictions that have helped shape the evolution of China’s international actions and identity, and will continue to do so in the future."

"Tim Rühlig’s book is a compelling analysis of the inherent contradictions in Chinese foreign policy making and provides valuable advice for all those trying to make sense of Beijing’s approach to the world. A timely contribution to the big question of how Xi Jinping’s China will shape the new global order." 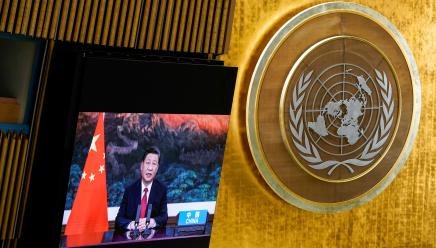 An Opportunity and Challenge for Europe
Author/s
Dr. Tim Rühlig