The international community seems to lack the leverage to influence Iran and bring about a lasting de-escalation after the killing of Qasem Soleimani, an inflammatory act by the United States. The Arab Gulf states, countries in the region that would be affected severely and directly in case of further retaliation, can help.

The Arab Gulf states should build upon the small, yet significant rapprochement related to Iran that had started developing before the killing. Specifically, they should offer Iran the dialogue it has long been awaiting in order to integrate it into regional security arrangements – in return for Iran moderating its response to the killing and helping to develop a concrete plan for the future of Iraq. In a second step, Iran’s regional policies, as well as its nuclear and missile programs, need to be included in this dialogue as well. Such overtures should be supported by intense diplomatic efforts by the German government and the EU, which must not only incorporate actors close to the adversaries – for example, Pakistan and Japan – but also entail the exploration of economic opportunities for Iran despite US sanctions.

Saudi Arabia and the United Arab Emirates (UAE) should take the lead by agreeing to such an approach to the current developments in the region while reconciling further with Qatar in the framework of the Gulf Cooperation Council (GCC). This would require both countries to move beyond their narrower interests. Evaluating past developments and economic necessities could help them to revisit the standing cost-benefit calculus behind their policies on the US, Iran, and Qatar.

For Saudi Arabia, the US proved to be an unreliable security guarantor when the kingdom was hit in its most strategic heart, namely its oil fields. The sophisticated weapons that the country has purchased from the US for a billion dollars have also failed to enable it to protect its strategic assets and people. Moreover, an increase in the escalation already sparked by the US killing of Soleimani risks further distortion of oil and stock markets, as well as the flow of foreign direct investment (FDI), which Saudi Arabia direly needs to realize Vision 2030, its long-term national goals. Consequently, the key to the kingdom’s and the region’s security lies not with the US but within the region itself – in engagement with Iran on regional issues and frameworks for security.

For the UAE, engaging with Iran is easier but – given that 80 percent of its population consists of expatriates and violent conflicts in the region thus constitute an existential threat – no less vital. The country enjoys a different relationship with the Islamic republic as illustrated, for example, by the established trade between Iran and Dubai. The UAE also caused recent tensions with Iran to decrease when – having secured gains and influence – it withdrew its troops from southern Yemen.

Smaller Gulf states such as Oman and Kuwait have always attempted to act as mediators in the Middle East. Given their size and, hence, vulnerability in face of more violent conflicts, they have the greatest interest in a more secure and peaceful environment in the region. They already maintain closer relations with Iran and could function as door openers for larger countries.

Under the current circumstances, a security dialogue among the Arab Gulf states – which would eventually have to be institutionalized to commit countries to it and make it sustainable – could serve as an effective platform for joint crisis management, manufacturing and coordinating policies with and vis à vis Iraq, and addressing threats posed by the so-called Islamic State. In a next step, Iran’s policy of asymmetrical warfare and its nuclear and missile programs will also have to be revisited. Given detrimental and unreliable US policies in the Middle East, as well as the possibility of another four-year term for President Donald Trump, such a forum could, in the longer term, assess the extent to which security in the Gulf could be provided predominantly by regional Asian actors themselves – including China, Russia, and Japan – and supported by the European side. An at least partial emancipation from the US in terms of security seems necessary although further cost-benefit analyses and feasibility studies are needed. Europe, too, needs to evaluate what it can offer here.

Diminishing and overcoming decades of animosity between Saudi Arabia and Iran will certainly require immense trust-building measures and time. Their diverging interests will be challenging to accommodate, and all parties will need to make concessions. Yet, especially in such dangerous times, political engagement is indispensable and would eventually serve the region and hence the entire international community – most importantly the citizens of the Middle East. It is irresponsible to let the region slide even deeper into war and destruction from which all sides will suffer. Indeed, current circumstances provide a good opportunity for Saudi Arabia to show magnanimity and revive the more conciliatory and constructive regional policies it used to pursue. The kingdom’s very reserved official reaction to the killing of Soleimani was already a vital step in the right direction. 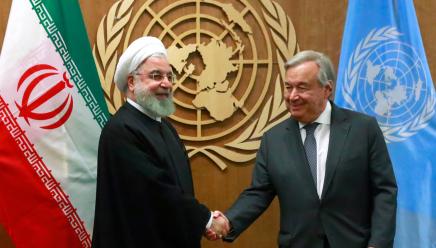