The Russian flag has been taken down, the withdrawing troops are looting the city, bridges have been blown up, the separatist leader Stremousov dead – but it is still unclear whether the announcement of the withdrawal is a feint.

On November 9, Minister of Defense Sergei Shoigu announced that he ordered Russia’s armed forces to retreat Dnipro River from the city of Kherson behind. The commander of Russian forces in Ukraine, General Sergei Surovikin, had reported to Shoigu the defense of the right bank of the Dnipro was “without any perspective” and called for the withdrawal to the left bank.

Once completed, this will mean that Russia has lost control over the sole regional center it held Ukraine, having occupied it since the start of the invasion in February. Moscow is forced to give up the city only a few weeks after declaring the annexation of the Kherson region, together with those of Donetsk Luhansk, and Zaporizhzhia. Apart from the evident impact on Russia’s prestige and credibility, it would also mean that it loses its bridgehead on the western side of the Dnipro River. Thus a future ground attack on Ukraine’s Black Sea shoreline in the Mykolaiv-Odesa direction would become unrealistic.

One reason why Russia needs to give up the city is that the occupational administration never managed to establish full control over the population. Despite all the repression, resistance to the occupier remained strong. All in all, the loss of Kherson constitutes a major defeat for Russia, militarily and politically.

The Russian positions in the western part of the Kherson region have become gradually weaker in the past weeks. Ukraine’s systematic campaign to strike the supply routes and logistical channels of the Russian forces with long-range precision artillery and drones bore fruit. The supply situation of the Russian troops west of the Dnipro River became critical.

Outside the city, the Russian defensive lines started to become thinner. Russian sources admitted that on November 8 Ukraine had launched a new attack on Snihurivka, a crucial junction on the frontline and achieved a— then limited—breakthrough. Ukrainian troops kept pushing, and by the afternoon of November 9 the Ukrainian flag was raised over Snihurivka.

There had been several indicators of Russia preparing a retreat. The evacuation of the civilian population to the eastern bank of the Dnipro has been going on since mid-October. It is not completely clear to what extent this means helping civilians to leave voluntarily or a de facto deportation. However, there have been no reports of excessive use of force against civilians who did not want to leave.

The occupation administration was also evacuated. The Russian flag was taken down from Kherson public buildings at the beginning of November.

Another signal of a retreat being prepared was that Russian soldiers started to massively and systematically loot the city. They took away cars, tractors, household appliances, and even the bones of Prince Grigory Potemkin (the lover and trustee of Catherine the Great) were dug out from the city cathedral and taken away.

Deputy of the Occupational Administration Dead

On November 9, it was announced that the deputy head of the occupational administration, Kirill Stremousov had died in a car accident. He was an ardent supporter of the Kremlin agenda, including the annexation of the region. His sudden death, regardless of its real reason, could be interpreted as a message to other separatist leaders about what might await them if they fail to stabilize their regions.

In parallel to the preparations for a withdrawal, Russia had been building fortifications on the eastern bank of the Dnipro for a while. Now these will be used to cover the retreat across the river and to prevent Ukraine from attempting any hot pursuit.

The construction of fortifications on the eastern bank also indicate that Russia is probably not planning to blow up the Nova Kakhovka dam, because the subsequent flood would wash away the newly built structures along the river.

There has been widespread concern that Russia might use the announcement of a withdrawal from Kherson to lure Ukrainian forces into a large-scale ambush into the city. However, on the morning of November 9, footage emerged indicating that Russian forces had blown up at least four bridges in the Kherson region. The most important was the Dariivsky bridge over Inhulets River, a major crossing point of the P-47 road leading towards the northeastern parts of the region located West of the Dnipro. There were also two smaller bridges demolished south of Snihurivka and another one along the Dnipro. The fact that Ukrainian army did not claim the destruction of any of these bridges supports the likelihood that they were blown up by Russia.

Demolishing the Dariivsky bridge severed the most important road connection between the city of Kherson and the northeastern parts of the occupied region west of the Dnipro. From now on, Russian troops will not be able to swiftly move from Kherson in the Kozatske-Beryslav direction.

The destruction of bridges indicates that Russia does not intend to defend any other parts of the Kherson region located west of the Dnipro. It is not completely clear at the moment, whether it will still try to defend Kherson city in urban combat, risking the total destruction of its forces dedicated to the task, or will really execute Shoigu’s order and retreat in an orderly manner. However, while the fate of the city cannot be predicted yet with absolute certainty and the ambush scenario cannot be fully excluded either, it is already sure that the other parts of the region west of the Dnipro have become indefensible for Russia following the destruction of thee bridges. 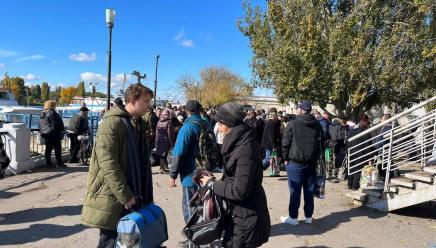