This text was first published by War on the Rocks, you can read in full here.

Not only is Germany’s heralded “sea change” — or Zeitenwende — on defense policy not the revolution it seemed back in early March, this isn’t even the first revolution that wasn’t. Despite recent claims to the contrary, it does not seem as though Germany’s security and defense policies are undergoing a revolution, but rather an evolution. At worst, Berlin’s words and deeds since Chancellor Olaf Scholz’ announcement of a Zeitenwende will turn into a post-Munich-Consensus déjà vu. That is to say, Germany has already promised once before to assume a greater responsibility in European, transatlantic, and international security matters in 2014 following the illegal Russian annexation of Crimea. In the years following this self-proclaimed interest in stepping up burden-sharing efforts, Germany efforts proved lackluster. If it allows the Zeitenwende to run a similar course as the Munich Consensus, Germany risks missing a rare window of opportunity to set in motion long-overdue steps to overhaul the country’s security and defense outlook sustainably and permanently. Most importantly, this requires nurturing a strategic culture in Germany’s public discourse, and now is the right moment to do so. Germany’s allies and partners should persistently pressure Berlin’s policymakers to turn Zeitenwende into a lasting change lest the current momentum withers away.

Scholz announced that Germany “will now — year after year — invest more than 2 percent of our gross domestic product in our defense,” after years of prodding and inaction. But Germany intends to reach that goal using the 100 billion euro special fund that was announced by Scholz to be a “special fund for the Bundeswehr … for necessary investments and armament projects.” Consequently, estimates suggest that the fund will run dry by 2025. There has been no talk about what will happen afterwards. That does not sound like the current coalition government plans to abide by its 2 percent commitment beyond its period in office. 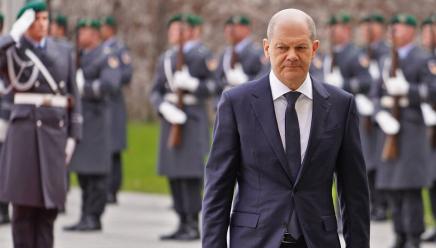